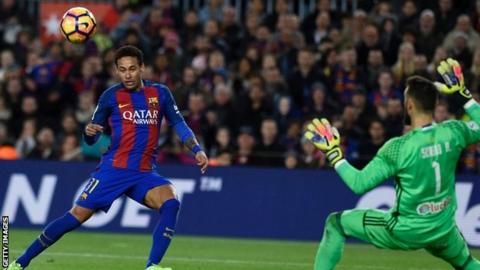 Lionel Messi scored two superb individual goals as Barcelona produced an archetypal display to see off Celta Vigo and return to the top of La Liga.

Messi made it 1-0 when he ran 45 yards and slotted in, before Neymar scored with a superb dinked finish.

Barca increased their lead with strikes from Ivan Rakitic and Samuel Umtiti before another solo effort from Messi.

It was a performance which Barca are renowned for but one that has been rarely seen this season. If they produce a similar display against Paris St-Germain on Wednesday then they have a great chance of overturning what seems an insurmountable 4-0 deficit.

Messi sent Barcelona on their way in the 24th minute.

The Argentine’s turn as he set off for goal was reminiscent of countryman Diego Maradona’s when he scored that dazzling solo goal against England at World Cup ’86. Messi had fewer defenders to navigate past, with Gustavo Cabral and Sergi Gomez failing to dislodge the ball from the diminutive forward before he fired past Sergio Alvarez.

Neymar then produced the best finish of the night when he converted Messi’s through-ball with the deftest of touches.

Rakitic slotted in the third in the 57th minute when Rafinha’s heavy touch in the area fell into his path before defender Umtiti grabbed his first in Barcelona colours with a poked finish from Messi’s square ball.

The Barcelona magician then capped of a great night for both himself and his team when he cut inside from the right and sold a dummy before firing in through the legs of Facundo Roncaglia.

Enrique’s side lead by a point from Real Madrid, who defeated Eibar 4-1 earlier on Saturday. Real also have a game in hand on their bitter rivals.

Ballon d’Or 2016: The rise of Cristiano Ronaldo from talented teenager to football icon